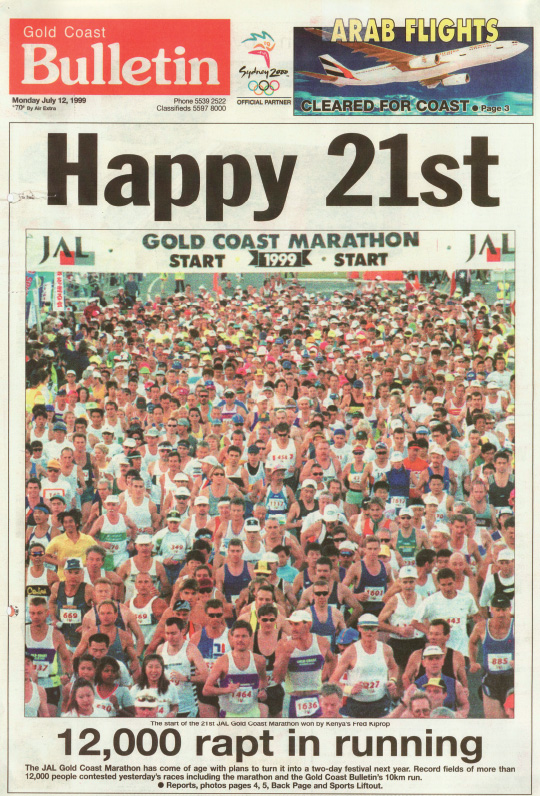 After being held at the Southport Broadwater for 11 years, the event changed venues to Runaway Bay. The route extended as far north as Killowill Avenue in Runaway Bay with the Broadbeach Mall the most southern point of the course.

Marathon legend Robert de Castella threw down the challenge to JAL Gold Coast Marathon competitors to break his 17-year-old Australian all-comers record of 2:09:18. $250,000 was on offer to anyone who could accomplish this feat. The time proved too fast for any competitor to beat with Kenyan Fred Kiprop backing up from the previous year to notch successive titles in 2:14:02. The first Australian home was Olympian Shaun Creighton of the ACT. Hiromi Igarashi of Japan won the women’s race in 2:35:19.

Another ACT runner Sisay Bezabeh, who would go on to represent Australia at the 2000 Olympics, took out the half marathon in 1:03:24. Romanian Nuta Olaru was victorious in the women’s race in 1:11:46.

The 10km run winner’s list featured some familiar names – one that was already very familiar and another that would go on to become a household name.

Queensland’s Pat Carroll, already a four-time winner of the marathon and one-time winner of the half marathon, was successful in the 10km run this year in 30:04. NSW’s Kerryn McCann would go on to represent Australia at the Sydney Olympics and provide a memorable sporting moment when she won the 2006 Melbourne Commonwealth Games marathon. Kerryn won the 10km run in 33:27.

The Gold Coast Marathon underwent a number of changes this year after falling into debt in just two years. The event management owed a considerable amount of money including athlete prize money from the previous year. With major sponsor JAL withdrawing from the event, the marathon looked set to fall apart.

The new-look Gold Coast Bulletin Marathon in 2000 was back on its feet, incorporating a Little ‘Uns 3km Walk/Run, and a major prize of a 14-day return trip to Los Angeles for two. The event continued its status as a leading international marathon.

Kenyan Joseph Kahugu was the men’s marathon victor, however was disappointed with his time. Posting a personal best of 2:07:52 in 1998, Kahugu’s 2:16 race was less than impressive to the Kenyan.

Japanese runner Takako Kotarida broke the finisher’s tape in the women’s half marathon in 1:11:16, while Cosmas Ndeti took out the men’s race in 1:03:29. 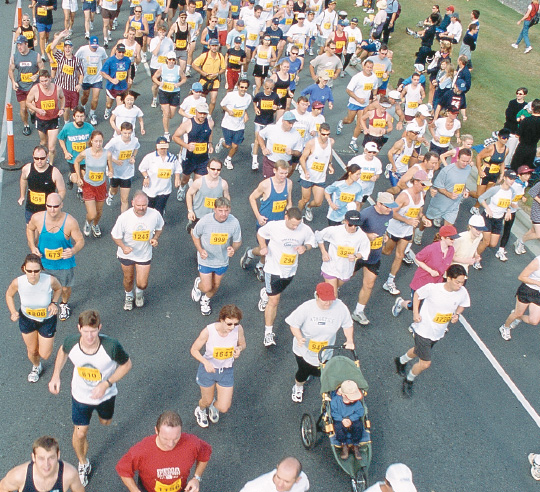 The marathon was this year taken over by Gold Coast Events Management, a subsidiary of Queensland Events Corporation. The flailing marathon suffered at the hands of private ownership and was thrown a lifeline in the form of a Government rescue package.

For the first time in event history, Dusty Lewis stepped down as race director, focusing on coordinating the timing of the event. Since 1996, the event has been timed via the ChampionChip system. The system relies on tiny computerized chips attached to the shoelaces of runners to record the moment that they pass over computerised mats.

New Zealand runner Phil Costley won the event in a personal best of 2:13:38. Costley demonstrated his worth to New Zealand selectors, who failed to include him in the World Track and Field Championships team. Dual Olympic medallist Yuko Arimori won the women’s event ahead of Kiwi Meagan Edhouse, and race record holder Eriko Asai.

Pacesetters were included in the marathon this year, designed to help runners determine how close they were to target times.

Four-time race champion Pat Carroll entered the race as a pacesetter, tying a balloon around his waist to set the standard for the three-hour finish. 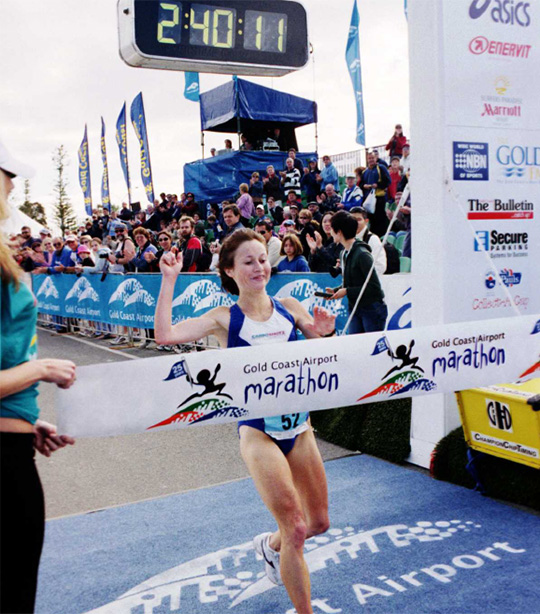 With the Gold Coast Airport signing on as the naming-rights sponsor for the next three years, the 25th anniversary event returned to the Broadwater Events Parklands for another successful year. With the country’s largest marathon field of 2062 runners assembled to contest the Gold Coast Airport Marathon continued to build upon the reputation established in 2002 as one of Australia’s finest running events.

A new 7.5km course was included in 2003 for participants in the Asics Walk. Originally combined with the 10km run, the new course headed north from the Broadwater Events Parklands before returning to the precinct and offered walkers a chance to enjoy a walking-only event.

2004 again claimed a record number of runners and walkers with 11,804 participants facing the starter in the Gold Coast Airport Marathon events. The number easily eclipsed the previous record of 11,063 set in 2003 and was made up of people from 34 countries from as far away as Austria, the United States and the Czech Republic.

Australian Athens Olympic marathon representatives Kerryn McCann and Lee Troop celebrated wins in the Asics Half Marathon. Their respective times of 1:11:08 and 1:02:54 fell little more than a minute outside of the 1992 race records of Midori Fumoto (1:09:38) and Benson Masya (1:01:16). 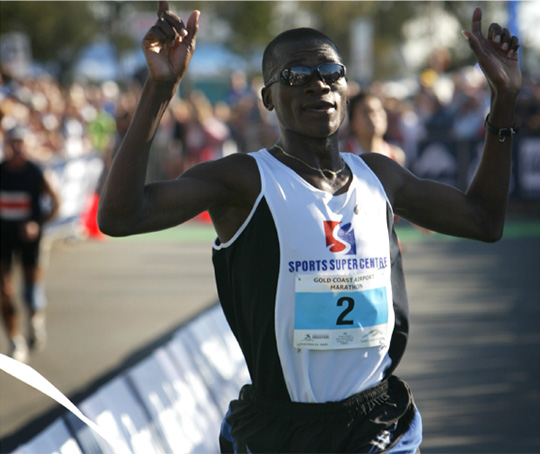 2005 started successfully for the Gold Coast Airport Marathon as it took out the ‘Best Major Festival and Event’ at the Australian Tourism Awards. Living up to the award, the event again delivered record numbers as 12,700 participants hit the streets over six events.

2003 winner, Tanzanian Dickson Marwa took out the men’s race in 2:16:14 and in a tight finish was followed home just three seconds later by Japan’s Tsutomu Saeki and Kiwi John Henwood.

Former world triathlon champion Jackie Gallagher crossed the line in 2:34:45 seconds to bag her first-ever marathon win after her switch to the sport in 2001. West Australian Lauren Shelley, Gallagher’s protégé who received coaching from the champion via email, finished second almost three minutes later in a time of 2:37:20 ahead of Tanzanian Sarah Majah, who took third place for the second year running.

With the Gold Coast Airport cementing their commitment to this iconic Gold Coast event for another three years, the 2006 event again attracted huge crowds with 13,800 runners participating in the iconic event, including a Japanese contingent of some 1300 competitors.

After returning from injury, Troop took out the men’s event in a time of 2:14:13 followed by Canberra’s Gemechu Woyecha and New Zealand’s Scott Winton.

In the women’s race, Jennifer Gillard took out her first Australian marathon to cross the line in 2:41.05 in front of Queenslander Helen Stanton and New Zealand’s Melanie Burke. 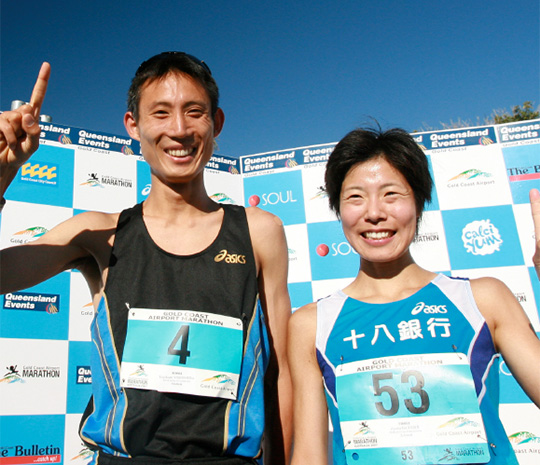 In picture-perfect conditions the Gold Coast Airport Marathon recorded the largest increase in participation in any one year over the 29-year history of the event, smashing the record set in 2006 by almost 2,400 with a total of 16,200 people from 30 countries taking part in the six events.

In the first time since 1994, it was a Japanese victory in both the men’s and women’s race. Toyokazu Yoshimura stormed home in a time of 2:20:07 to beat former New Zealand cross country champion Ben Ruthe (2:20:46) who stunned the field by taking out second place in his debut marathon while journeyman Tanzanian, Oswald Revelian (2:20:48), improved on previous fifth and sixth placings in the Gold Coast event to claim third.

A reasonably unfancied Japanese runner and a 37-year-old mother from New Zealand took the men’s and women’s spoils at the 30th staging of the Gold Coast Airport Marathon, which drew a record number of 21,012 people.

For Osaka-based Ietani it was a back up of sorts to his fellow countryman Toyokazu Yoshimura’s 2007 victory.

Crumpton’s win saw her become the first female in over two decades to become a repeat winner of the 42.195km Gold Coast event, previously claiming victory in 2003.