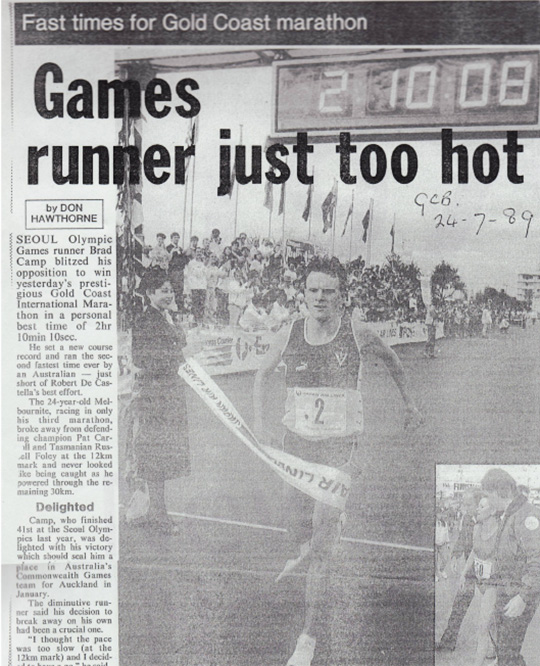 More than 2,500 people took part in the 11th annual Gold Coast International Marathon which would be one to go down into the record books. Event organiser Dusty Lewis was on the money with his forecast that Australian competitors would dominate the 1989 event which had its start and finish line on the Esplanade outside Broadbeach State School.

Brad Camp, member of the 1988 Australian Olympic Team in Seoul, broke away from the field at the 12km mark to win the race. Setting a new race record of two hours 10 minutes 11 seconds, Camp secured a place in the 1990 Commonwealth Games team with this performance. At the time, it was also the second fastest time ever run by an Australian in Australia – only behind Rob de Castella.

The JAL Gold Coast International Marathon experienced its first major taste of controversy in this year’s event. The first competitor across the finish line in the men’s marathon, Yasushi Hashimoto, was initially declared the winner before the crown was handed over to Allan Carman.

The Japanese runner was disqualified after it was alleged he had breached race rules by using a cyclist as a pacesetter for the final five kilometres, clearly gaining an advantage over other competitors. South Australian Carman finished 10 seconds behind the disqualified Hashimoto, exerting a stellar effort to seize victory in 2:15:15 in only his second ever marathon attempt.

Another Japanese runner Hiromi Satoyama won the women’s race outright in 2:40:57 but the race was still tainted by controversy involving another contestant who was at the centre of a drug scandal involving her recent use of slimming tablets which fortunately was proven to have no effect on her performance.

Malcolm Norwood won the men’s half marathon in a new race record of 1:02:39 with Gold Coast Commonwealth Games representative Jenny Lund taking out the women’s division in 1:13:30. 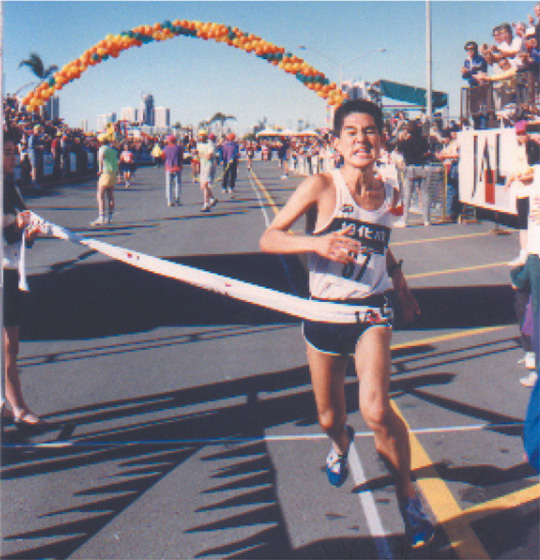 With Southport hosting the titles for the third year, 1350 runners completed the 42.5km JAL Gold Coast International Marathon in 1991. The event, which was broadcast live around Japan and Australia by television stations NHK and ABC respectively, boasted a 60 strong team of medics to ensure proceedings ran smoothly.

International runners rained on the Australian parade, with foreign competitors fixing the top three places. Shinji Kawashima and Koichi Takahashi made it a double for Japan by finishing first and second, with Russian contestant Sergei Rozum crossing the line third. 21-year-old triathlete Jackie Hallam won the women’s event in only her second marathon endeavour, asserting her authority as an indisputable threat.

This year’s marathon proved a major success to both organisers and the local economy, injecting $5.5 million into the Queensland economy. The emphasis of this year’s event was placed on tourism, with the marathon attracting more international visitors to the Coast than Indy. Olympian and champion distance runner Herb Elliott started the race in true celebrity style.

Japanese competitors took out the event in both male and female events, deeming Japan a force to be reckoned with. Katsumi Kitajima came from behind to finish first in the male division. Late entrant and hot race favourite Mari Tanigawa came through to take the women’s event. 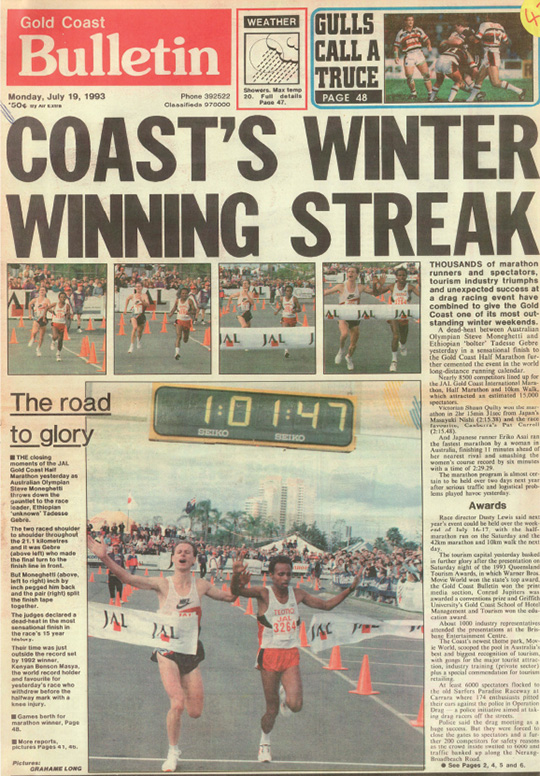 Entrants in the JAL Gold Coast International Marathon had extra incentive to break the tape first this year- the event doubled as selection for the Commonwealth Games team competing in Canada. This factor acted as motivation enough for three-time race champ Pat Carroll, who entered the race again after a four-year break.

Former race winner Allan Carman joined Carroll, however neither could wrestle victory from Victorian Shaun Quilty. Quilty triumphed in a time of 2:15:31, followed by Masayuki Nishi in second, and Carroll in third.

Japanese featherweight Eriko Asai won the women’s event in 2:29:29 after Aussie favourite Jenny Dowie was forced to withdraw due to an unexpected pregnancy. Asai set a race record that is yet to be outdone by any competitor since.

The first dead-heat in event history was recorded between long distance champion Steve Moneghetti and Ethiopian Tadesse Gebre in the half-marathon event.

Almost 10,000 runners participated in the JAL Gold Coast International Marathon in 1994 with the start and finish based in Southport.

Japan once again showed its force as a marathon running nation by sweeping the first three places in the men’s race and first place in the women’s race.

Hajime Nakatomi was victorious in the men’s in 2:15:05 ahead of fellow countrymen Kazuo Matsumoto and Yoshihisa Okamoto. This was Nakatomi’s third win from four marathon starts. Pre-race favourite Alfredo Shahanga from Tanzania pulled a hamstring at the 30km mark and struggled to the finish.

Yuko Yamazoe won the women’s race in 2:43:20 ahead of Australians Joanne Cowan and Bev Lucas. The 38-year-old Cowan finished in 2:45:35 despite having to stop twice during the race with a stomach complaint.

The first Australian home in the men’s race was fourth place getter Michael Dalton of Tasmania in 2:16:17, enabling him to claim the national title.

Kenyan Stephen Mayaka claimed victory in the men’s half marathon in 1:01:48, with Japanese runner Izumi Maki taking out the women’s race in 1:10:21. 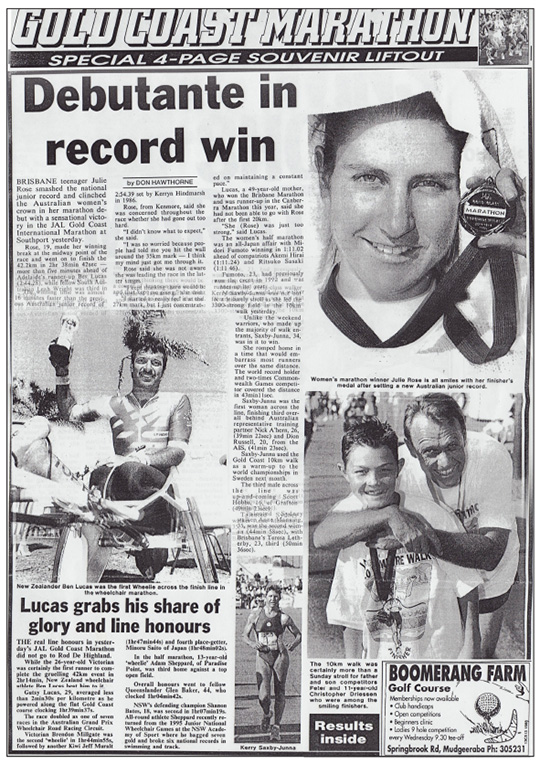 The 1995 JAL Gold Coast Marathon held on Sunday 16 July drew a record 9,700 competitors from 13 countries to the event with the start and finish area in the Broadwater Car Park. More than 1,000 participants hailed from Japan in addition to 60 media representatives.

The event provided an opportunity for the winners of the marathon to qualify for the selection trials for the 1996 Australian Olympic Team. There was also a lucrative purse of $100,000 in prizemoney up for grabs.

Unfortunately, this year the JAL Gold Coast Marathon was marred by controversy. The course had been measured to Athletics Australia’s stringent standards before the race, however an error in setting up the markers at the southern turning point caused the course to fall 300 metres short of the official marathon distance of 42.195 km.

Victorian 26-year-old Rod de Highden took out the men’s event in 2:13:59 earning the right to compete in the Olympic Selection Trials in Japan. Brisbane 19-year-old Julie Rose won the women’s event in 2:38:42, and at the same time smashed the Australian junior marathon record by almost 16 minutes. She finished more than five minutes ahead of runner-up Bev Lucas from Adelaide.

Ownership of the JAL Gold Coast International Marathon was this year signed over to Sports Marketing and Management (SMAM) and Javelin Australia. While the event was still coordinated by Dusty and Sheila Lewis, these two corporations assumed management responsibilities for the event.

The event incorporated a week-long list of functions and social activities and was thus dubbed Gold Coast Marathon Week. The San Remo Pasta Party was held at Sea World on the Friday before the race to encourage competitors to load up on carbohydrates. On the Saturday, competitors had the opportunity to play Beach Volleyball at Surfers Paradise or make their way to the Gold Coast Turf Club for a flutter at the Social Thoroughbred Race Day.

Race day was held on Sunday 21 July and attracted another record field of 11,902 participants. Eleven Australian and British servicemen took part in the marathon, which was ultimately taken out by Victorian computer programmer and triathlete Magnus Michelsson in 2:20:20. Sydney physical education teacher Sylvia Rose took the honours in the women’s event in 2:40:17, joining 27-year-old Michelsson in claiming an Australian double.

Another Aussie Darren Wilson was victorious in the half marathon in 1:02:25, with Japanese runner Sizuko Oka taking out the women’s race in 1:11:05. The first 10km run was incorporated into the event and what an inauguration it proved to be. Sydney’s David Evans clocked a sizzling 28:57 to salute in the men’s race. Brisbane 38-year-old mother-of-four Marcy Sheer powered to the line to break the tape in the women’s race winning in a time of 35:43. 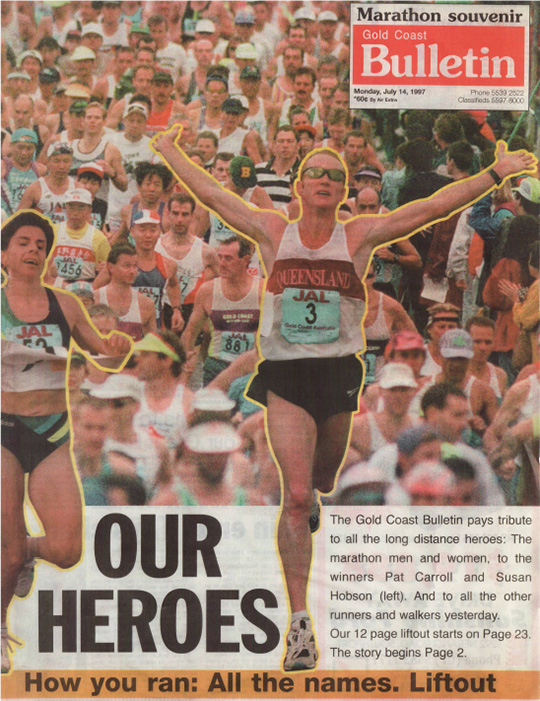 A massive cash incentive offered to participants in the JAL Gold Coast International Marathon saw a multitude of international superstars entering the field. Gold Coast Mayor Ray Stevens offered $500,000 to anyone breaking a world marathon record, and $50,000 to the competitor who set a new race record. This bonus even enticed two of the world’s top ten marathon runners into the event.

Cable sports network ESPN telecast the event for the first time in America. The marathon boasted social events such as the San Remo Pasta Party, the ProSports Trade and Leisure Expo, the Mayor’s Breakfast, the Last Drink Stop Party, and the Recovery Run.

Despite failing to break world or race records, Pat Carroll was content with his victory, his fourth in race history. In her first Gold Coast Marathon, Susan Hobson of Canberra was the first woman to cross the line. The former Olympic representative went on to win the event after Japanese sensation Mari Tanigawa withdrew at the last moment.

Over 200 million people tuned in to watch the JAL Gold Coast International Marathon in 1998. People from all around Australia, Japan and America watched the 20th anniversary race.

Kenyan runner Fred Kiprop won the marathon in a time of 2:11:15, three minutes ahead of Kenyan training partner Sammy Lelei. In a shock departure, race veteran Pat Carroll pulled out of the race before finishing.

Estonian favourite Jane Salumae led a solo race from start to finish, aiming to improve on her personal best time and earn $250,000 by bettering the race record. Unfortunately she didn’t secure the money but won easily by three minutes.