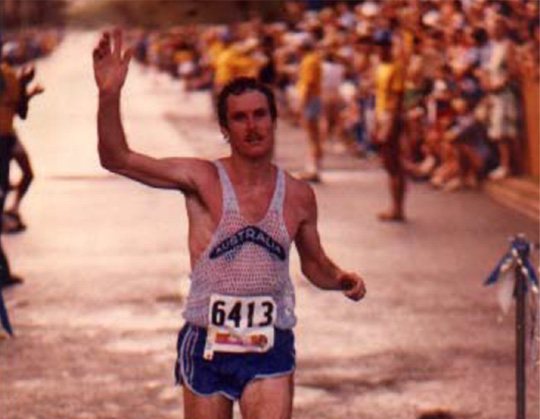 On 2 September 1979, the Gold Coast suburb of Evandale hosted the inaugural Gold Coast Marathon. The event was initiated by the Rotary Club of Surfers Paradise Central as part of a health awareness campaign for the Gold Coast.

Led by Rotarian and prominent local baker John Goldstein, 18 months of planning went into the first event and included a series of lead-up marathon clinics to educate the community about health and fitness. Running legend Ron Clarke participated in a number of these clinics with his son during holiday visits to the Gold Coast.

The first Gold Coast Marathon consisted of a six-lap loop course, starting and finishing at the Evandale Civic Centre. The course took runners over the Chevron Island bridge, through Surfers Paradise, back over the Isle of Capri bridge to Evandale.

Gold Coast Mayor Keith Hunt had the honour of starting the first event which included a field of 124 for the marathon, 144 for the half marathon and 423 in a fun run.

In other interesting tid bits, former Channel Seven newsreader and media identity Mike Higgins was the official commentator, while a contingent of Australian and New Zealand Army personnel and two British soldiers participated.

The Gold Coast Marathon was taken out by 31-year-old Victorian runner Eric Sigmont with Mary Murison the first woman to cross the line. As a reward for their efforts, Eric and Mary were presented with a return trip to Honolulu courtesy of Qantas to contest the internationally renowned Honolulu Marathon.

In only its second year, the Gold Coast Superfast Marathon was deemed one of the largest in Australia in terms of competitors, second only to Melbourne’s Big M Marathon. The event was held on Sunday 31 August at Evandale, with entries stemming far and wide including Japan and West Germany.

Lismore’s Mary Murison won the women’s marathon for the second consecutive year, while Sydney distance runner and future Commonwealth Games 5000m gold medallist Andrew Lloyd was the winner of the men’s race smashing the previous year’s record by almost six minutes. Their reward was once again a trip to contest the Honolulu Marathon in December.

The oldest competitor in the marathon was 69-year-old Harry Batterham, who in the previous eight years had completed 14 marathons, and was yet to be defeated in the over 60 years age group.

The youngest competitors in the full marathon were 12-year-olds Hans Van Dosselaer of the Gold Coast and Mark Kennedy of Sydney. Hans was one of four in his family that ran the marathon and he had two younger siblings in the half marathon.

After the success of the inaugural event in 1979, the 1980 Gold Coast Marathon attracted a major sponsor – Superfast Film Laboratories.

Proceeds from the 1980 event also enabled a 26” colour television set to be donated to the Gold Coast Hospital for use in the Eye Ward. 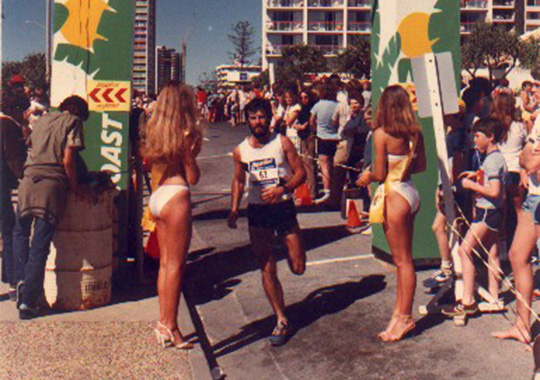 A change of venue from Evandale to Surfers Paradise generated a major boost to the profile of the Gold Coast Marathon, with over 86 international competitors involved in the events in 1981. This was also the year that Dusty Lewis took over as event coordinator, a commitment maintained for the following 20 years.

The new route went from the Surfers Paradise Surf Life Saving Club along the Esplanade to Main Beach. From Tedder Avenue, it veered back to Gold Coast Highway and south to the iconic Pink Poodle motel. Participants then turned north again, continuing to Sea World, before running the stretch from Main Beach to Burleigh Heads. The final leg of the race traversed the distance from Burleigh Heads back to the starting point at the Surfers Paradise Surf Life Saving Club.

Close to 400 runners took part in the marathon while more than 500 participated in 7km fun run. Local competitors dominated the marathon, with Rod Lyons (2:24:04) and Margaret Reddan (2:58:33) the first male and female to cross the finish line.

As their major prize, Lyons and Reddan received a trip to New Zealand to compete in a marathon of their choice.

For the first time in marathon history, an international competitor won the event. Hot favourite, and non-English speaking New Caledonian runner Alain Lazare (2:19:21), did not disappoint with his 15th marathon win, finishing 11 minutes ahead of second placegetter Peter O’Neill. Organisers were uncertain of Lazare’s participation until race morning while O’Neill was a late entry to the event, deciding to compete only the day before the race.

Jill Colwell (2:43:25) was the winner of the women’s race by 20 minutes, setting a new personal best and Queensland record all in one.

The only wheelchair contestant, Ian Aitchison of Brisbane, finished 18th overall. The oldest starter in the race was Brisbane 70-year-old Wyn Foster who had contested the Brisbane Marathon six weeks prior. 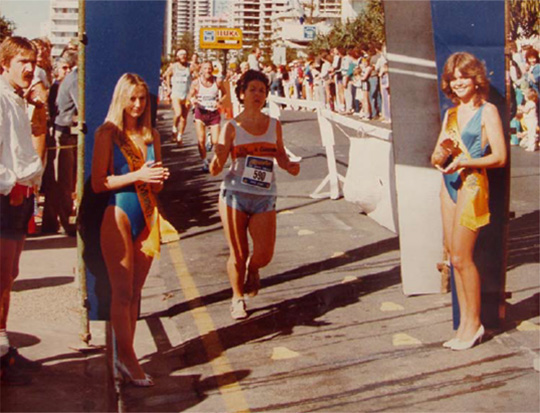 More than 1,000 participants took part in the 1983 Superfast Gold Coast Marathon, which was the final time the start and finish was located on the Esplanade outside the Surfers Paradise Surf Club. These numbers exceeded the organiser’s expectations for the marathon, making it the biggest in the event’s first five years.

There were two favourites to take out the men’s marathon – Canberra ’s Gary Hand and Gold Coast school teacher Laurie Adams. Marathon organiser Dusty Lewis predicted that this rivalry could lead to a new race record previously set by Alain Lazare in 1982.

Gold Coast Mayor Denis O’Connell started the race, which also included ultra marathon runner Cliff Young. Cliff had to start the race slightly ahead of time so his ‘professional’ status did not impinge on the ‘amateur’ race.

Lewis’ prediction proved right with Laurie Adams from the suburb of Miami winning the event in record time. Adams broke away from the pack at the 33 kilometre mark, and was 600 metres clear of runner-up Gary Hand at the finish line. Adams, 32, shaved more than three minutes off the race record with a time of 2:16:22.

A huge cheer erupted when Cliff Young crossed the line in just over three hours and 12 minutes. First home in the women’s marathon was Brisbane runner Rhonda Bushby in 2:49:17.

In the lead-up to the race, a forum on ‘Better Running Techniques’ was held at Iluka Holiday Apartments with speakers including Rolet de Castella (Rob’s father), Betty Cuthbert and Cliff Young.

The Gold Coast International Marathon was this year based at Broadbeach for the first time. With the start line at Kurrawa Park, competitors ran to the Main Beach caravan park, the most northern point of the race. From here runners made their way south to Magic Mountain at Nobby’s Beach, before returning north to Kurrawa Park, and completing a second circuit of this course.

The number of race entrants again surpassed expectations, with more than 1,400 participants greeting the marathon starter.

In a race upset, Brisbane cabinetmaker Pat Carroll won the race in only his second attempt at a marathon. This would be the start of what would be one of the most illustrious distance running careers by a Queenslander in history. The then 22-year-old beat race favourite Leon O’Dwyer in wet conditions in a time of 2:23:16, more than 25 minutes faster than his debut marathon time.

The event festivities also included a 4km fun run, the national inter-services championship between Army, Navy and Air Force, and a Media Challenge pitting the Brisbane television stations against each other in a half marathon relay.

The youngest competitor in the marathon was 10-year-old Bradley Reynolds who had earlier endured medical scrutiny over his long distance running feats for someone of his age. After the race, organisers announced that Surfers Paradise businessman Alan Black would contribute $25,000 towards the next event as prizemoney. 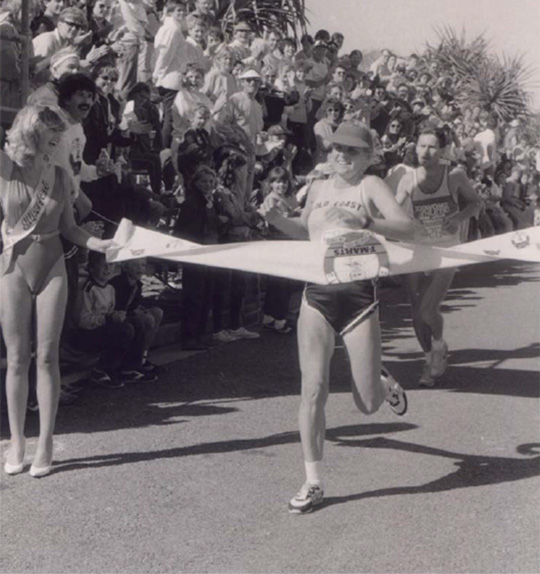 The event attracted more than 1,600 participants in the marathon and half marathon. The start and finish line was situated in Broadbeach again, this time on the intersection of Old Burleigh Road and Elizabeth Street.

After declaring the race as a warm-up for the Big-M Melbourne Marathon due to a virus that limited her Gold Coast preparation, 33-year-old Margaret Reddan proved her worth by taking first place. Shocking everyone including herself, Reddan claimed her third Gold Coast Marathon title in just under two hours 55 minutes in what was going to be just a training run.

The 1986 Gold Coast Marathon had a new naming rights sponsor in brewing company XXXX. The race once again started and finished at Broadbeach with 253 of the 825 participants attempting their first marathon ever.

The male and female winners of the marathon were awarded return trips to compete in the New York Marathon.

Relative unknown Peter Mitchell took out the men’s marathon in a time of 2:14:59.  With this result, the 23-year-old Victorian scraped into the Australian team for the World Championships by one second. However previous Gold Coast Marathon champion Pat Carroll was not so lucky, falling short of the 2:15:00 selection standard by 33 seconds.

Benowa ‘super mum’ Margaret Reddan collected her fourth Gold Coast Marathon title in 2:47:09, the third in succession and fastest of her four wins. Showcasing her dedication to running, Margaret won the Australian Championships six weeks prior to the XXXX Gold Coast Marathon, and was back in training only one day after the Gold Coast event.

In 1986 the XXXX Gold Coast Marathon was broadcast on Channel O for the second consecutive year.

Out of the 2,000 plus competitors, the oldest competitor was Brisbane’s John Peterson who celebrated his 70th birthday on marathon eve, while the youngest was 13-year-old Bradley Reynolds who completed his third full marathon. 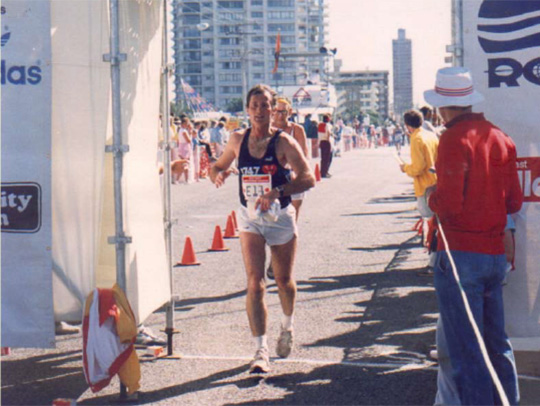 The Sea World Gold Coast Marathon was contested on 26 July 1987 with the start and finish once again located at Broadbeach with more than 2,500 participants taking on the challenge. The course travelled north to The Spit past Sea World and then returned south to Broadbeach.

Visiting Japanese runners Takashi Kaneda and Yaskhiro Shimizu were expected to blitz the marathon field of 800-plus, with event coordinator Dusty Lewis predicting their times to be the fastest recorded on Australian soil.

However Gold Coast runner and Miami High School teacher Laurie Adams had other ideas, blowing the field away with a winning time of two hours 18 minutes 24 seconds. This was Laurie’s second win in the Gold Coast Marathon after claiming his first victory in 1983.

The Japanese runners finished third and fourth, with their results attributed to jetlag as their delayed flight delivered them into Australia only 24 hours before the race.

The women’s victor was Janet McAfee, a Brisbane runner who had recently claimed the Moreton Bay Marathon.

In the half marathon, one of the event’s favourite sons Pat Carroll stormed to a win in a fast time of 1:02:51.

Pat already had two Gold Coast Marathon wins under his belt in previous years and decided to focus on the half marathon after contesting the national 15km road race titles a week earlier. Sydney’s Mandy Bovey won the women’s half marathon in 1:18:15.

Marathon legend Pat Carroll took out this year’s Gold Coast Marathon which attracted 3,000 participants across all events. Winning his third title, Carroll sped away from a field of international competitors to finish in a time of 2:10:44, a race record for the marathon at that time.

New Zealand runner Ngaire Drake ran home in 2 hours 39 minutes to take the women’s marathon, and was closely followed by countrywoman Bernadette Portenski to secure the quinella for New Zealand.

One of Australia’s greatest ever female marathon runners Lisa Martin took out the half marathon in 1:09:42, a Commonwealth record at the time, with the Australian Institute of Sport’s Adam Hoyle winning the men’s race in 1:03:40.

Martin then went on to record one of the greatest achievements in her illustrious career two months later by winning the silver medal in the women’s marathon at the 1988 Seoul Olympic Games in September.