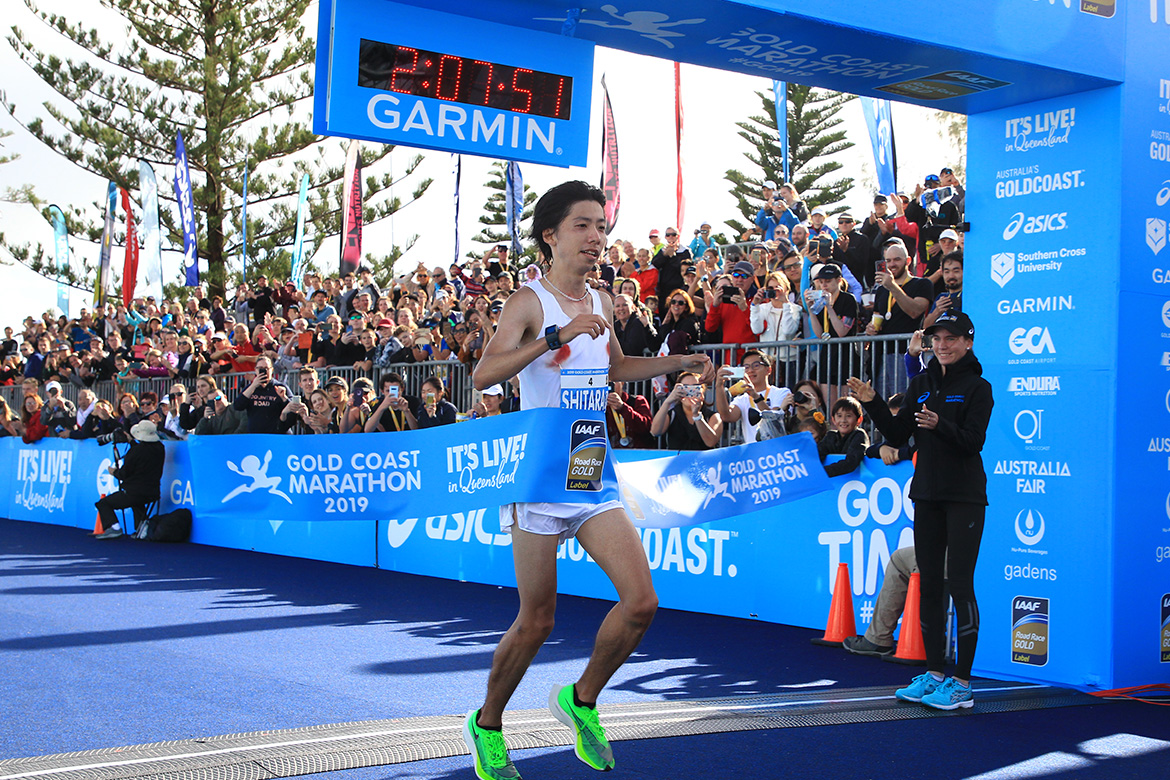 The 27-year-old had an exciting duel with placegetters Barnabus Kiptum of Kenya and Zane Robertson of New Zealand over the final 12km before making his move with 2km remaining.

It was the eighth win by Japanese men in the 41-year history of the event and bettered the race record and Australian all comers record previously held by Kenyan Kenneth Mungara (2:08:42).

Kiptum, the winner of the Hong Kong Marathon in February, finished second in a personal best 2:08:02, while marathon debutant Robertson placed third in 2:08:19.

It was an extra special result for Robertson as his time was a New Zealand record, bettering the previous mark of his brother Jake (2:08:26, Lake Biwa, 2018), and he was crowned the IAAF Oceania Area Marathon Champion for 2019.

The first Australian across the line was Victorian Liam Adams in sixth place clocking a pb 2:11:36 – a bittersweet result for the 32-year-old as it was an agonising six seconds outside the 2020 Olympic qualification standard.

6,700 runners took part in the Gold Coast Marathon this morning.

“My training was really good. I think that the race really showed the quality of my training. It really brought out my performance today.”

“I’m very happy. My training was great and I came here with confidence and that is why I was able to produce this result.”

“It was pretty easy until 30km. I kept it very smooth and comfortable. After the turnaround at 37km, I dropped back from the leaders but then luckily around 39km they came back to me again. I just ran in my own rhythm and cruised on into the finish.”

On his race tactics:

“I didn’t have any race plan. I just wanted to go in and run the race that happened.”

“It was a little on the windy side but it was the same for everyone so it didn’t get to me.”

On his rivals towards end of the race:

“I dropped back from the leaders at one point but kept running in my own rhythm so I pushed past them.”

On his confidence going into the Olympic trials:

“It’s definitely a confidence builder and I have had a lot of things to make me confident but this is a big one heading into the Japanese Olympic trials.”

“I was pretty conservative at the start. We knew the wind would be tough and it was but I kept the pacemakers in check running nothing above 3:03 (minutes per kilometre pace) and 2:58 at the beginning.”

“On the turn we picked it up and around 28km to 32km it started to get really hard again with the gusts swirling.”

“I think Yuta, the Japanese (runner), is a world class athlete who played the game and played it smart.”

“He expected to win and came through just when we were beginning to die. We had nothing left to go with him.”

On returning to the Gold Coast:

“The (Gold Coast) Marathon next year is too close to the Olympic Games (to run the marathon).”

“I’ve already put it to the meet organisers that, if they pay well and get enough support to get me and my brother Jake out, we’ll attack a sub 59 (minute) half marathon here.