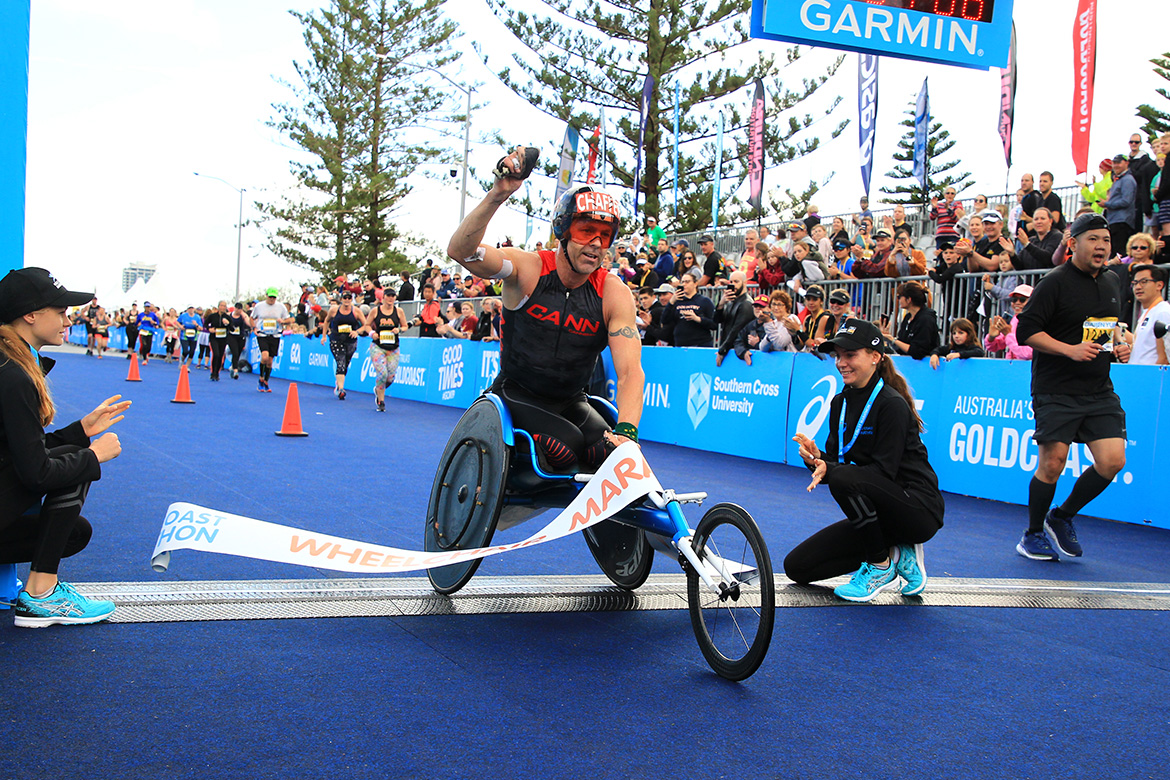 Australian Bill Chaffey returned to the podium of the Wheelchair Marathon.

Australian Paralympian Bill Chaffey (AUS/NSW) has made a triumphant return to the Gold Coast Marathon, taking out the Wheelchair Marathon, while golden girl Madison de Rozario (AUS/NSW) continued her love affair with the Gold Coast.

Chaffey had been an annual participant in the Gold Coast Marathon, winning the wheelchair event in 2015 and placing second in 2016, until the five-time world para-triathlon champion took a two-year sabbatical from the race to concentrate on the 2018 Gold Coast Commonwealth Games, before making a triumphant return in 2019, winning in 1:46:12.

De Rozario was second overall and took the women’s crown for the second year in a row in 1:49:35. The Gold Coast remains a favourite for the 25-year-old, who not only won this event last year, but also won two Commonwealth Games gold medals.

Second male across the line was four-time Paralympian and 2017 winner Richard Colman (AUS/VIC) in 1:52:10. While six-time Paralympian Christie Dawes (AUS/NSW) finished second in the women’s event in 1:52:23.

Chaffey and Colman pushed each other early with the pair going through the 5km marker in Surfers Paradise together at 12:31.

Chaffey had edged ahead by the 10km, reaching that point on the new section of the course at 25:21, with a 27-second break back to Colman. 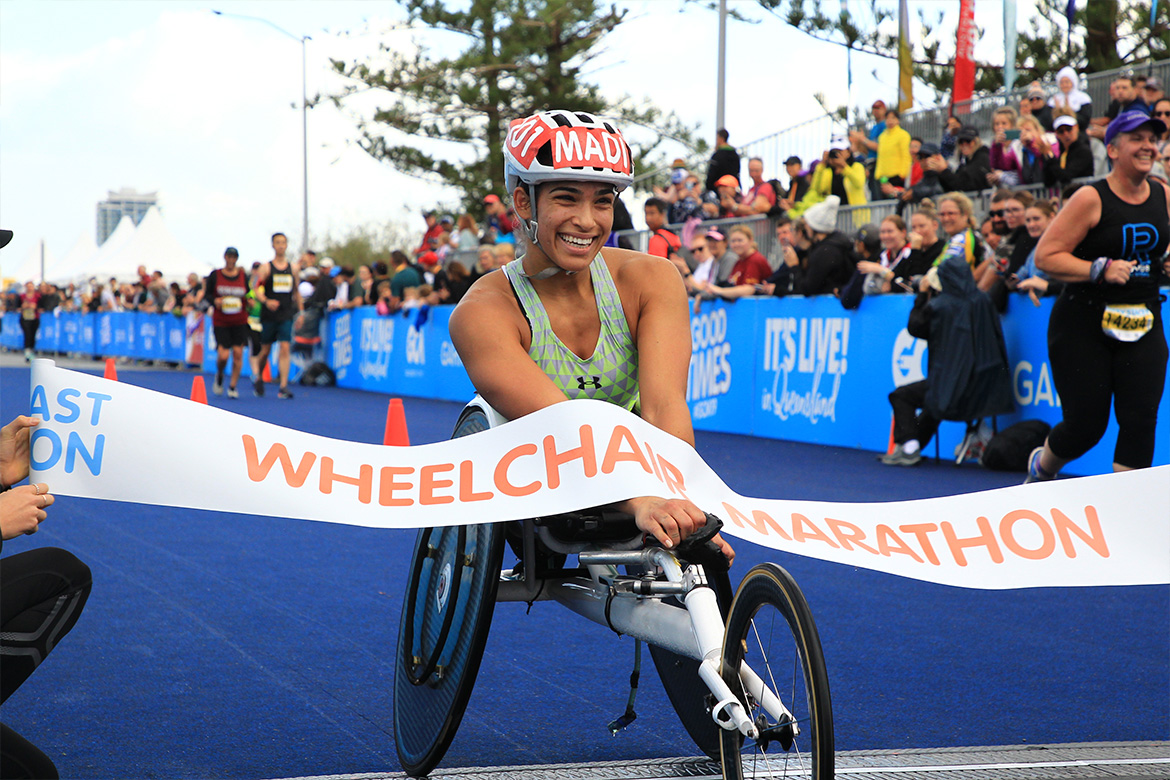 De Rozario was in fact the first wheelchair athlete through the 5km at 12:30.

Chaffey reached the halfway mark in 53:26, while de Rozario reached that point in 55:07. 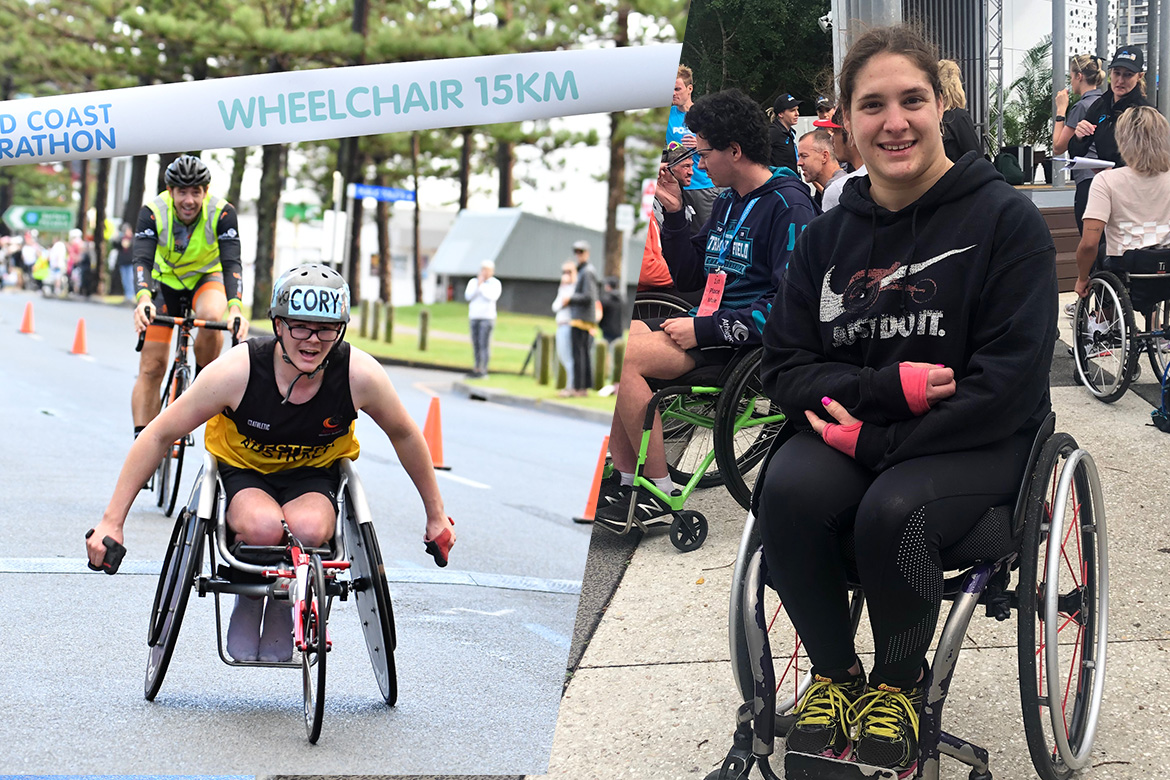 Cory Crombie and Emily Preketes took the tape in the Wheelchair 15km.

“It’s good to be back. I won back in 2015, came second in 2016 and came back for the win today. I was a bit concerned about Richard and how close he would be, but I managed to break him at about 15km and hold on.”

“I was dreading the rain. I don’t like pushing in the rain because we get a bit of slip on the push rims. The conditions weren’t the best that I have raced here but how can I complain.”

“I went pretty hard early. I chased and chased but things just didn’t go my way today. I paid for it at the end. Unfortunately I didn’t do what I wanted.”

On the wet weather:

“A minute before the start, it got very wet and it just wasn’t my day.”

“It’s the position you are in. Everything starts to hurt and on top you can’t breathe. It’s alright but it’s just a part of it.”

“It was a bit wet out there so the tyres were a bit slippery which was challenging but was fun. This race is always a lot of fun. The wind coming home was definitely a bit of a punish.”

On training towards the Olympics:

“Yeah that’s the plan. Everything we are doing right now is with that as the goal.”

On the start with the rain:

“Everything came up well. It didn’t affect me at all.”

“I was feeling frustrated because my steering had never let me down before. Ultimately, I am happy with my form and felt good.”

“After having a baby last year, I still have work to do but I’ll get there.”

On his overall performance:

“The course was good. It’s my first 15km here on the Gold Coast. I’ve only been doing wheelchair sports for six months so not very long.”

“I don’t really have any established tactics yet so it was more just pushing hard.”

On his future within the sport:

“There is nothing planned at the moment. I know I’m going to do the Oz Day 10km which was the first event I ever did and I’ll probably do this event again next year.”

On her overall performance:

“I think it went really well. The course has changed a little bit but it was good – flat with a little bit of hill but that’s it.”

“I kept slipping during the race but I had to find my grip so I could start pushing again.”