The 2019 Gold Coast Marathon is shaping up to be an exciting one with the announcement today that long term rivals Kenyan Kenneth Mungara and Japan’s Yuki Kawauchi, who produced one of the closest finishes in the event’s 40-year history, will once again face each other.

Mungara edged out Kawauchi by just one second to win the 2016 Gold Coast Marathon in a finish that came down to the wire with a sprint between the pair in the finish chute, creating an unforgettable highlight on the event’s timeline.

“I’m thrilled to welcome both men back to the Gold Coast this year, and along with the rest of the elite field which will be announced shortly, these great runners will put the race record under threat and vindicate our position as Australia’s fastest marathon,” Mr Hart said.

“The duels between these two on the Gold Coast have created one of the great rivalries in sport in this country and based on recent form, we’re in for another mouth-watering battle.

“Our ability to attract first-class international elite runners is a testament to the standard of our event and our flat, fast course located in one of the world’s most popular holiday destinations.”

Kawauchi was previously known for shunning sponsorship in favour of continuing his full-time job in administration at a high school near Tokyo whilst running marathons outside of work hours, however he has recently accepted sponsorship deals, including with ASICS.

“This coming Gold Coast Marathon is my first marathon as a professional runner so I’m coming into it having plenty time to focus on my training,” Kawauchi said.

“I’m challenging myself to achieve my personal best and I’m confident I can place better than recent years. I am familiar with the course and I know how to manage my race at the Gold Coast Marathon.”

While Kawauchi’s 2018 Boston Marathon win put him in the international spotlight, it’s his prolific racing schedule (he’s run over 80 sub 2:20 marathons in his career – a world record) and a penchant for costume running that has also drawn attention, most notably for having run half marathons in a business suit and a panda costume. 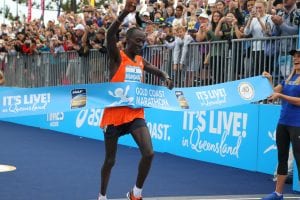 This will be the fifth consecutive year the pair meet on Gold Coast soil, with Mungara winning three of his four appearances at the event while Kawauchi has been unable to add to his 2013 Gold Coast Marathon title since Mungara has been on the scene.

The ageless Mungara is also confident of breasting the tape despite the challenge from Kawauchi.

“I’m looking forward to seeing Yuki again. It certainly won’t be an easy job defending my track record against him but the rivalry we have built up on the Gold Coast keeps me wanting to come back and have him challenge me,” Mungara said.

“The Gold Coast is one of my favourite places to run, not only because there’s such a great atmosphere and ideal running conditions but I’ve had great results here.”

While Mungara still holds the course and Australian All Comers record of 2:08:42 which he set in 2015, he will need to work hard to defend his title from Kawauchi who is in good shape this season after his recent hit out at the Lake Biwa Mainichi Marathon last month.

Kawauchi’s time of 2:09:21 in Beppu bettered Mungara’s 2:12:47 in Hong Kong in February by 3 minutes and 26 seconds, albeit in slightly different conditions, indicating that this could be the year Kawauchi finally beats his long-standing rival.

However, a win won’t come easily against Mungara who is the single-age marathon World Record Holder across four separate ages. The 45-year-old former barber turned marathon runner’s fastest marathon to date was in 2011 in Prague where he ran a time of 2:07:36.

Head to head- Mungara vs Kawauchi to date