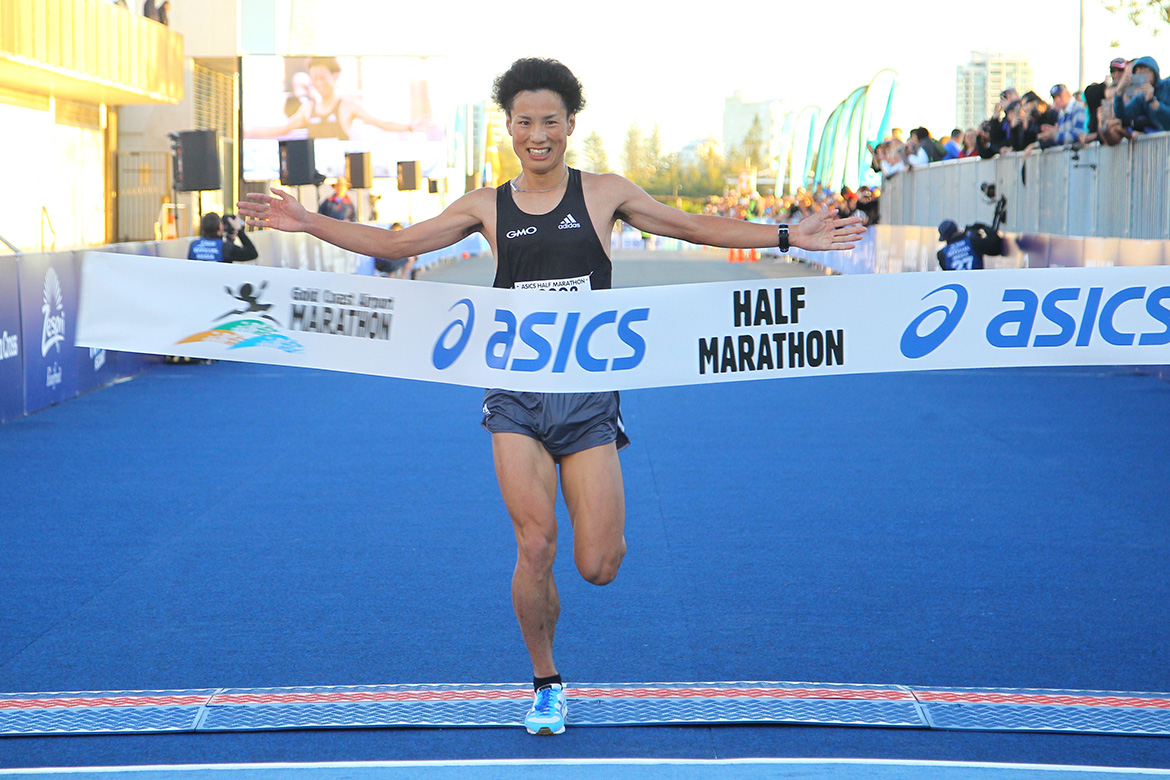 Japan’s Hiroki Yamagishi took out the men’s ASICS Half Marathon today in 1:03:14

More than 9,100 runners faced the starter in cool and ideal running conditions for the 21.1km race as part of the Gold Coast Airport Marathon program.

Yamagishi’s 1:03:14 calculated to a 35-second winning margin over Victorian Liam Adams (1:03:49) and Tasmania’s Dejen Gebreselassie (1:04:12) while former US national cross country champion Hall’s massive 45-second advantage at the 10km mark was maintained to the finish.

Hall, whose recent training in Ethiopia was interrupted by a fortnight of illness, broke the tape in 1:10:31 ahead of a laryngitis-affected Australian Rio Olympics marathoner Milly Clark (1:11:15) and fellow Australian Rio 2016 representative, South Australia’s Jessica Trengove (1:11:36).

Yamagishi’s win was the sixth for a Japanese man in the history of the event while Hall’s was the first for a US woman and perfect redemption for a second placing in the 2015 event. 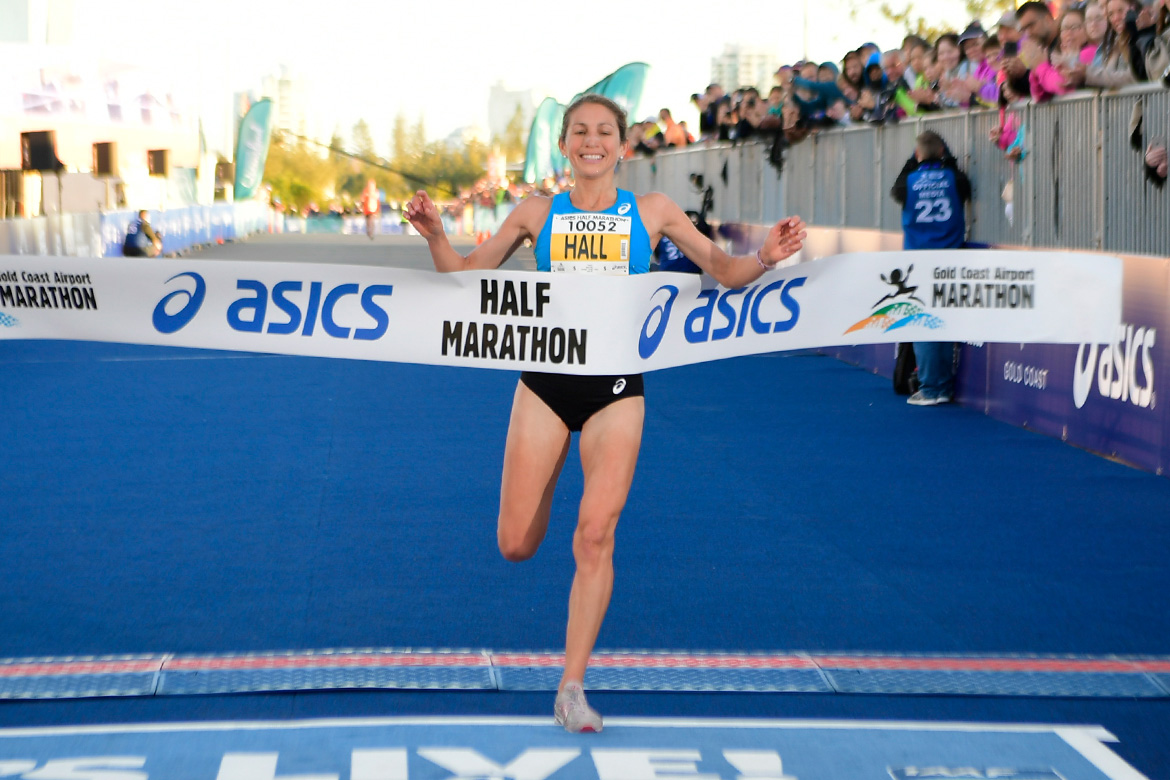 American Sara Hall blitzed the women’s ASICS Half Marathon in 1:10:31

On his motivation to win the race:

“I don’t have that many opportunities to race outside Japan so I came to the Gold Coast. Coming overseas I really wanted to run a good race and target not just the win here, but for my future development.”

On whether he was trying for a race record or personal best (PB):

“Yeah, I thought about it. The conditions were good and I thought if it works out I’d like to run a PB (personal best) here but the second half was a little bit hard. I got on my own and it was a little hard to keep it up so I missed the PB.”

On when he thought he would win the race:

On racing on the Gold Coast:

“It was a really beautiful place to run. When the sun came up the view was beautiful and [there was] a lot of support from other runners and such. [It’s a] great place to run.” 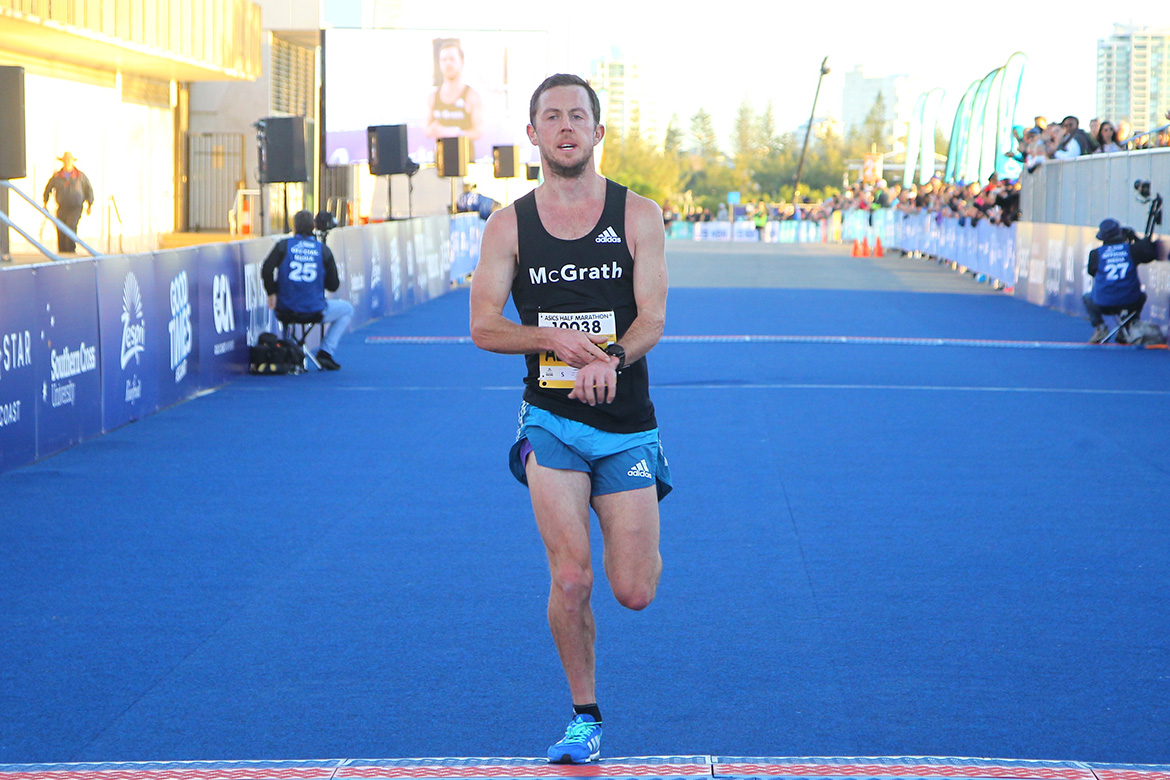 “I’m a little bit disappointed. I would have liked to get closer to my PB, but training has been terrible recently and that just showed.

“I probably went through my first 10 kilometres a bit too quick; I kind of knew that I wasn’t in that shape and I was pushing over the edge a little bit.

“I kind of knew I was going to blow up.”

“It feels like I’m in between seasons, like there is no purpose towards training. I’m trying to build into a marathon and that just doesn’t help when you have a result like that.

“It was good, they were nice conditions. It was fitness at the end of the day which affected me.”

On his next event:

“[It will be the] Berlin marathon, so I’ve roughly got three months. I’ve got a lot of work to do between then and now. I just need to change up a few things in training and make it a lot harder than I’ve been training.

“It’s not looking likely that I will run a fast time there, so hopefully I can run something decent.” 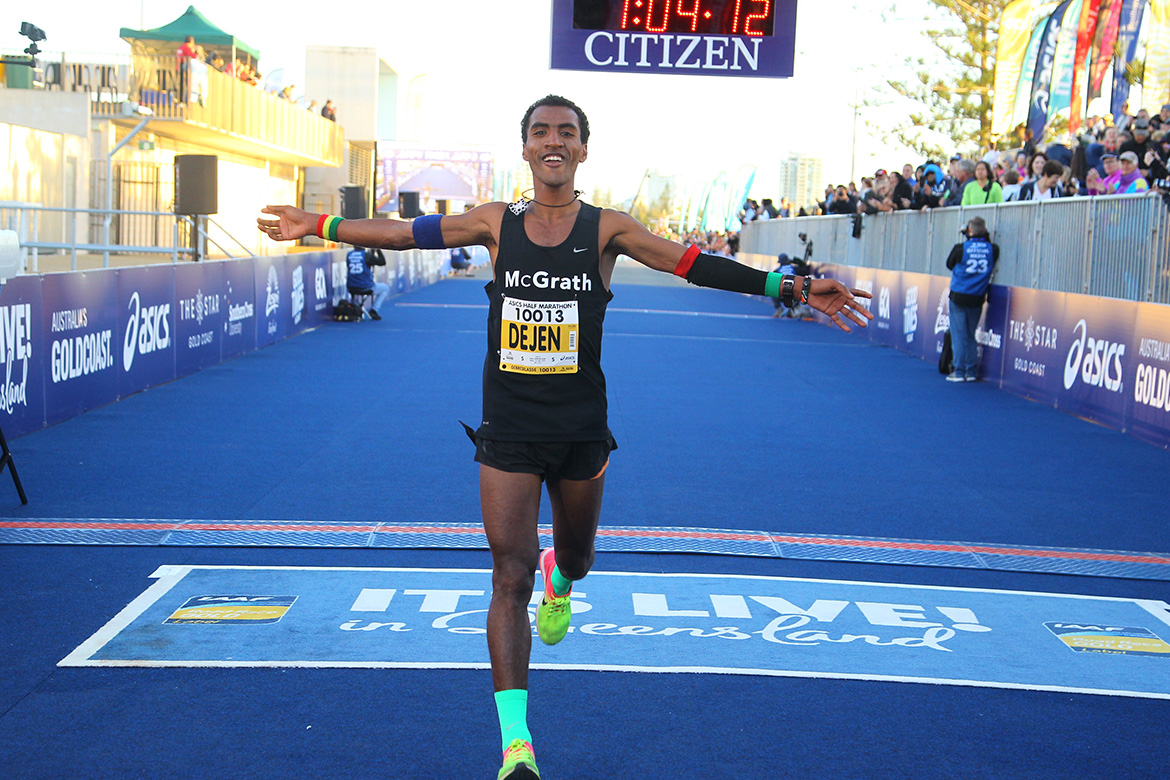 Dejen Gebreslassie from Tasmania finished third in the ASICS Half Marathon

On his thoughts crossing the finishing line:

“Man I’m feeling buggered; I’m a bit tired. That last kilometre was 2:55 (two minutes, 55 seconds) so I had to really push myself to really run a fast time.

“My coach told me the last five kilometres has to be fast, so I was trying to make sure that I followed his words and just go hard.

“I was watching my time every kilometer. If I felt I was going slow I’d tell myself, ‘whoa I’m going slow I need to increase my pace’ – but it was perfect.”

On whether he achieved his goal:

“I got a PB by two minutes. It’s amazing. So now I’m preparing for the Gold Coast Commonwealth Games.”

On how the race unfolded:

“I never felt like I lost it. My focus was on. I was dead focused. I said to myself, ‘if I can’t do it today I’ll never do it again. I have to get the confidence going. You have to believe in yourself’.”

“It’s beautiful. I love the Gold Coast – beautiful weather and beautiful people. It’s a fast track and the people are awesome, they cheer you on. The crowd makes sure you go hard or go home.”

“I’d like to thank my coach, Sean Williams, first of all. Another big thanks to the Gold Coast people for making this such a nice and a beautiful race.” 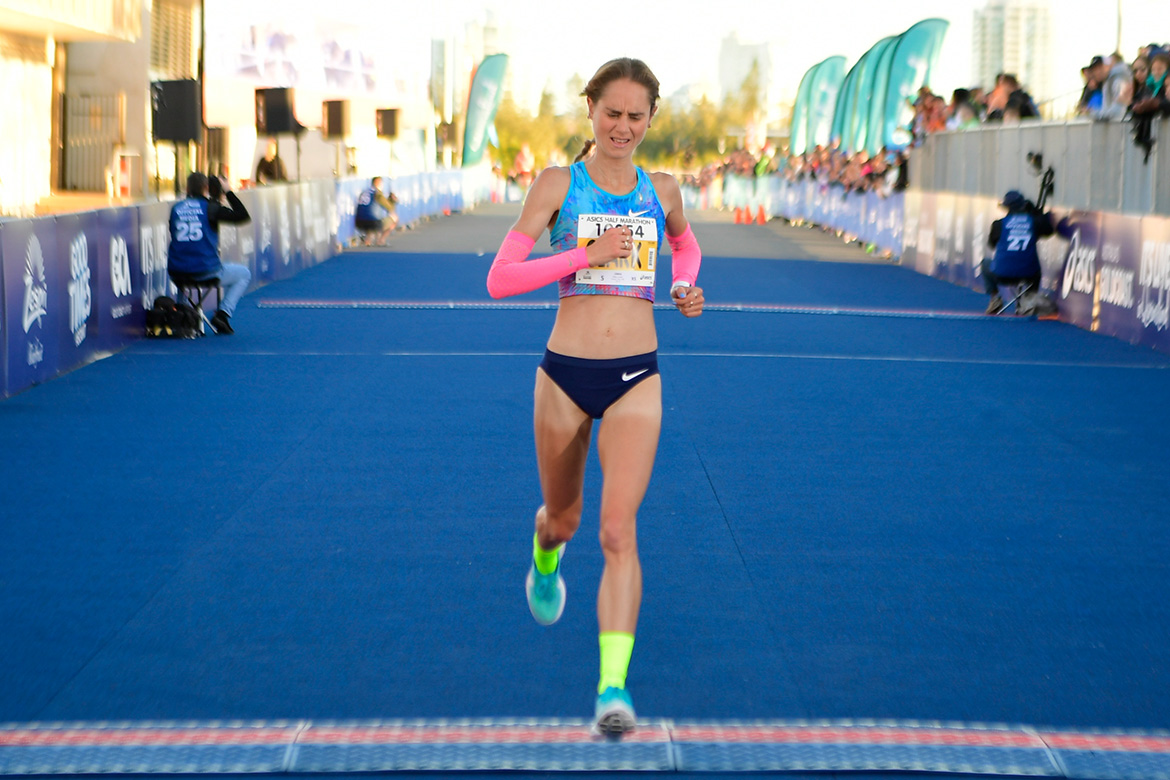 “[2015 winner] Eloise [Wellings] had a strong day that day, but this year I’m so happy to be back here; it’s one of my favourite races I’ve ever done.

“You can’t beat the conditions and the course out here, it’s just perfect. Especially in July when the [United] States is boiling hot, this is the place to be.”

On where in the race she thought she was going to win:

“It was a funny race. I just came from Ethiopia where I was training for three weeks. Two of those weeks I was sick with food and water issues, so I didn’t know what to expect coming out here.

“I was a bit like, ‘ah this could be bad’ but, you know, I was on the starting line and said to myself, ‘let’s just go out there and do it and go for a PB because you don’t get days like this too often’.

“So I went out at PB pace and didn’t quite hold it at the end, but I’m really happy with the win.”

On whether she achieved what she wanted in the race:

“I just feel very blessed to have this day and the win and just for the time at where I’m at.”

On how this marathon compares to others:

“This is one of the most incredibly run races I’ve ever been to, It’s such an honour to be a part of it again and I hope to be back again with my family.

“I have four daughters and they’re all jealous when I tell them about the kangaroos and the koalas, so hopefully one year I can bring them out here.”

On her personal support:

“I was just thanking God this whole race. He has carried me my whole career and when I was sick I had to rely on his strength to really stay positive and believe I could get to the line healthy, so I’m really thankful to God.”

“I went better than I thought I would. You never know how tired your legs will be, but I just tried to hang on and stuck with the leaders as long as possible.

“We Aussie girls just tried to stay with the leaders for as long as we could.”

On her race tactics and her hopes of winning:

“I felt pretty solid the whole time and good right up until the end. I didn’t really think about winning – if Sara [Hall] hit the wall then you never know, but she was too good.

“Jess [Trengove] and I broke away and I tried to hang on, but I’m still really happy. I’m actually a little bit surprised that I ran a personal best.”

On preparation for the race and the future:

“Training has been really good, with no niggles. However, I have had laryngitis this week, but I figured that you don’t run with your throat and I love the Gold Coast. It’s a sensational course, and you get to see everyone on the other side of the course cheering you on.

“You sometimes wonder why you get up at 4am and do it, but when you finish, it’s worth it.”

On her future plans:

“I’m going to keep preparing for the World Championships in London [in August 2017] and focus on that, and spend time in Europe.” 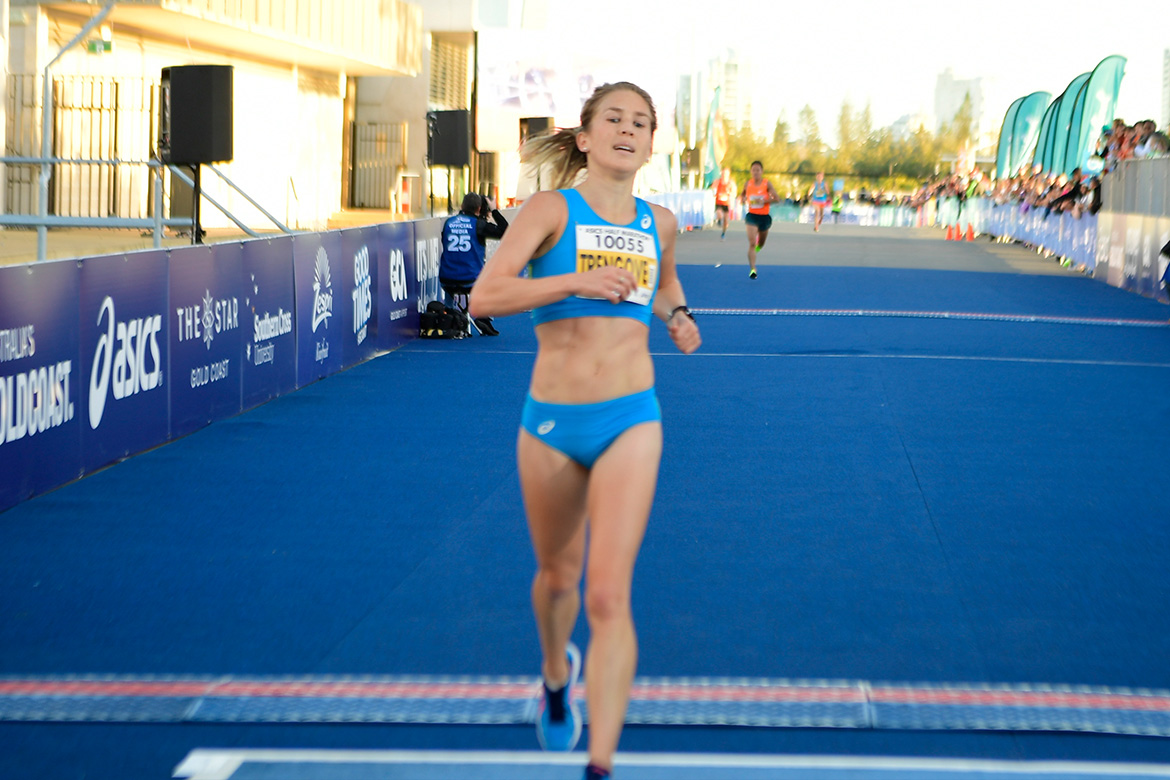 “It was an incredible field out there and just a fantastic race to be a part of.

“Milly and Sarah were the lead the whole way so, really, it was myself, Milly and Desiree [Linden, USA] and a couple of boys. Then, three [kilometers] to go, Milly made a bit of move. I was struggling to hold on so I just chased them home.

“I was happy with my run and Milly had a fantastic run today, Sarah was outstanding.

“I was really grateful to have Desiree from the United States out there today as well, a beautiful girl with huge potential.

“This will be beneficial in the running journey. We will go away feeling pretty happy after this.”

On her next race:

“I will have the world championships in five weeks and it will be good preparation.”