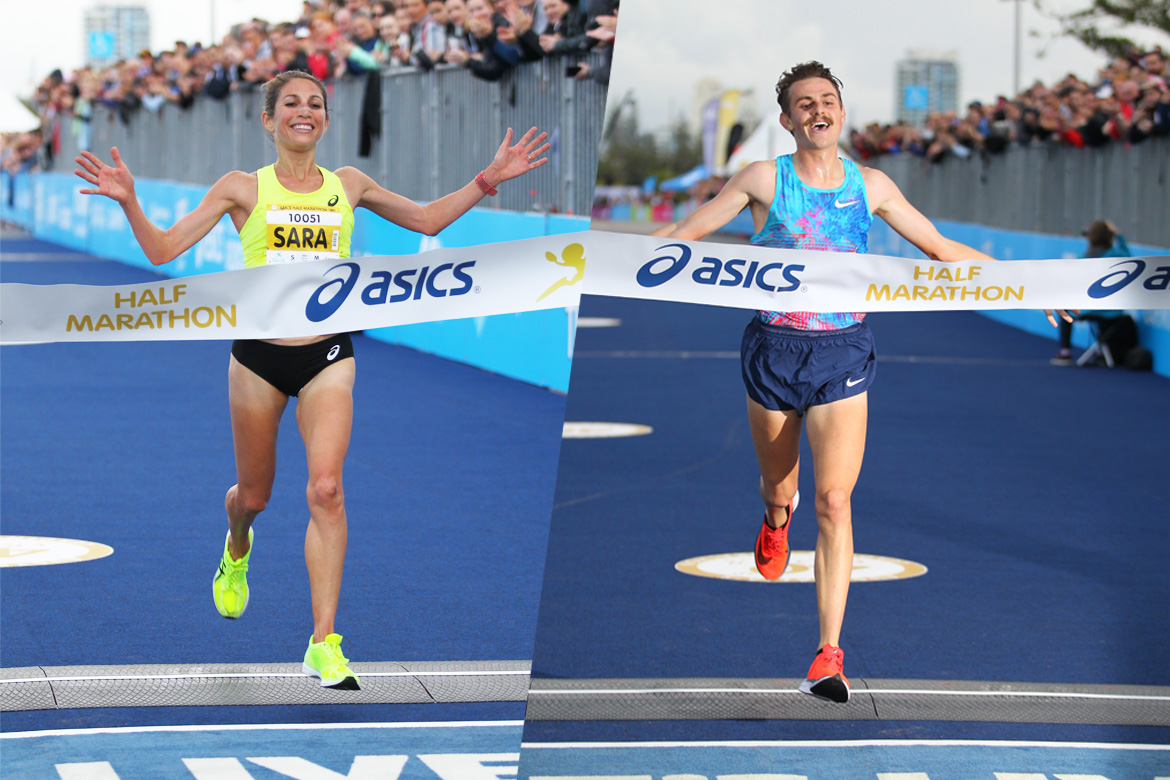 Reigning ASICS Half Marathon champions Sara Hall (USA) and Jack Rayner (AUS) will both be out to defend their titles in Sunday’s race.

THERE is a looming possibility that Sunday’s ASICS Half Marathon on the Gold Coast will herald a unique podium repeat.

Last year’s men’s and women’s winners in this event, young Melbourne sensation Jack Rayner and USA’s Sara Hall, are returning to defend their crowns. If they can again take the honours, it will be the first time in the 37-year history of the race that the same male and female have saluted consecutively.

The chances of this happening are far from remote.

Rayner, 23, has continued to collect podiums and accolades across the globe since his stunning performance on the Gold Coast last year and Hall already has significant ‘local form’ and a high-bar target Down Under.

Last month, after she took out the  USA Women’s 10K Championships in New York,  her attention turned to Sunday’s ASICS Half Marathon and a goal of sub 1:09. If  successful,  not only will it mean a  PB  but a race record, the Australian All Comers Record and a third straight victory on the Gold Coast.

Both men’s and women’s fields are packed with winning potential with both races shaping as spectacular showdowns.

Rayner’s last 18 months have been a classic tears to triumph story, with significant chapters written on the Gold Coast.

2018 started disastrously when he bombed out of both his Commonwealth Games selection races (the 5000m and the steeple). He then sat and watched the Games from the sidelines with plenty of ‘what ifs’ swirling through his head.

No sooner had the games ended, however, and Rayner was back on the Gold Coast clocking a then-personal best of 1:03:12 to win the ASICS Half Marathon.

A month later he added the Sunshine Coast Half Marathon to his growing list of scalps, before that season’s ultimate prize, winning the inaugural Commonwealth Half Marathon Championships held in Cardiff in a sizzling 1:01:01 in October.

That Cardiff time also rang some local alarm bells. The ASICS Half Marathon record is 1:01:16 and was set back in 1992 by Kenyan Benson Masya, who also won the World Half Marathon Championships in that same year.

This year Rayner clocked a 1:01:36 half marathon, placing third in Marugame, Japan, before an impressive 2:11:06 in his marathon debut in London. That time was under the Tokyo 2020 Olympic qualifying mark of 2:11:30.

Commonwealth + Cardiff Half Marathon Champion 61:01 🍕How good are arm warmers!?

There is a strong contingent of Japanese runners in this event, including Taku Fujimoto (PB 1:01:31), Minato Oishi (PB 1:01:33) and last year’s Fukuoka Marathon race winner, Yuma Hattori, who ran a super impressive 2:07:27 that day and also holds a half marathon PB of 1:01:40.

In the women’s field Hall, 36, will have to contend with plenty of Australian pressure to achieve her hat-trick. Alongside her will be someone who has already collected three half marathon crowns on the Gold Coast.

‪No one invests more in your running than your coach. Time, emotional energy, resources. Up at night figuring out how to get you to accomplish your goals. Early morning wake ups for races (without the pre-race endorphins). ‬ ‪ • Make sure they feel valued! ‬

Lisa Weightman won this event in 2007, 2009 and 2010. Her last victory also set the current race record and Australian women’s half marathon all comers record – 1:09:00. This year, Weightman has been in near career-best form, winning the Noosa Half Marathon in 1:10:04 and has her Gold Coast race record squarely in her sights.

Fellow Australian, Sinead Diver has placed three times on the Gold Coast – second last year (1:09:53), second in 2014 and third in 2016. In February this year she recorded a personal best of 1:08:55 in Marugame which means she heads into the race with the fastest half marathon PB in the field.

Diver’s recent form in the marathon has been even more impressive, clocking a 2:24:11 in April’s London Marathon to not only etch herself as the third fastest Australian female over that distance, but also bettering the Tokyo 2020 Olympic qualifying time of 2:29:30.

Other strong Australian contenders include Ellie Pashley (PB 1:09:20), who has also recorded an Olympic marathon qualifier, 2:26:21 in Japan in March, and Virginia McCormick, who ran 1:12:25 to place second in the 2016 ASICS Half Marathon and then ran 2:29:14 in the 2017 Gold Coast Marathon which is the second fastest ever in that race by an Aussie woman.

A strong Japanese field in the women’s ASICS Half Marathon is led by Sayaka Sato (PB 1:09:27).

(Consecutive male and female winners have occurred once in the Gold Coast Marathon. Pat Carroll and Margaret Reddan won back-to-back in 1984-85).